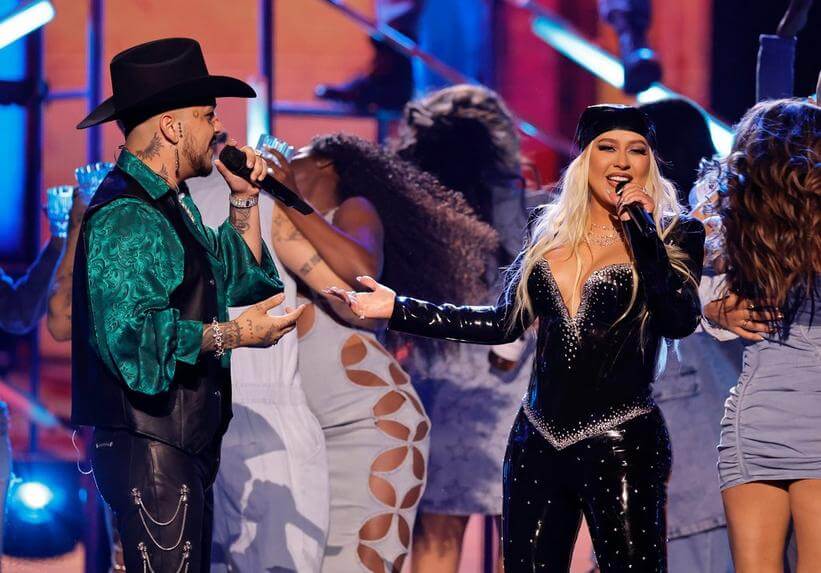 Latin superstars are abundant at the 2022 Latin GRAMMYs, and that was certainly the case when Christina Aguilera joined forces with Christian Nodal for a powerful performance of “Cuando Me Dé la Gana.” The pop veteran’s duet with the Mexican crooner is a part of AGUILERA, her first Spanish-language album in nearly 22 years. She embraced the regional Mexican music genre alongside Nodal.

Aguilera and Nodal belted their duet in front of a full mariachi, channeling West Side Story with their outfits and the stage setting. When their powerful voices united, so did the men and women behind them holding bottles of tequila — and when Aguilera hit her last high note, the stage was showered in fireworks.

Aguilera’s return to the Latin music scene was widely beloved by critics, and received seven Latin GRAMMY nominations this year. Aguilera is competing in three of the General Field categories: Album of the Year for AGUILERA, and both Song of the Year and Record of the Year for “Pa Mis Muchachas,” her Latina girl-power anthem featuring Becky G, Nicki Nicole, and Nathy Peluso.

This is the second year in a row that Aguilera has performed at the Latin GRAMMYs, as she and her “Pa Mis Muchachas” collaborators performed the song at the 2021 ceremony. She also delivered a soaring rendition of another AGUILERA track, “Somos Nada.” Before that, it had been two decades since she graced the Latin GRAMMYs stage, when she won Best Female Pop Vocal Album for her first Latin LP, Mi Reflejo, in 2001.

Stay tuned for a clip of the performance, and check out the complete list of winners and nominees at the 2022 Latin GRAMMYs.